The Sundered Lands of Palladium

The sound of thousands of quietly sleeping birds is quite loud as the companions disembark onto the rocky shore of Parrot Island. In the dark of night, they manage to find a path leading up to the highest point of the island, like Valinya saw in her recent vision. Valinya has trouble navigating the steep and rocky path but eventually everyone makes it to the top. Fortis, in the illusion disguise of a parrot, has to avoid several swooping passes by the island's namesakes, as well.

After some searching around at the top of the hill, they discover some flagstones in the ground, covered up by dirt and debris. After clearing them off, a stone trapdoor is seen in the middle of the area. Before opening, the group discusses possible defensive ideas, both magical and mundane and Arn suggests that Seeker use his enchanted blade to look through the stone and into the earth below.

Though is sword can see through earth, it does not allow him to peer through cut stone, like the flagstones at the top so he steps to the side and activates the blade's enchantment. Past about 3-4 feet of cut stone, Seeker sees what looks like a narrow, old, earthen shaft, supported by rotting wooden timbers. It makes some twists and turns but goes down for at least 50 feet. Arn decides there are no traps on the trapdoor and makes to pry it open.

Fortis performs a scouting mission on the tunnel and at some point, realizes that there is some magical danger just ahead. Not being able to identify it at the moment, he flies back up and tells the rest of the group. Arn takes his warning as a call to action and starts preparing to climb down. As he ropes down, he calls up a review of the shaft, "What a crappy piece of work this is. Total shit!" and continues further. Moonscar follows once Arn makes it to the first flat spot several yards below. Valinya follows next in her Body of Air form while Fortis and Silver remain above, watching for anyone sneaking up on them.

Eventually, Arn makes it to the spot that Fortis had detected a magical danger but finds no danger himself. As the companions continue to climb down, they knock more and more debris and dirt down, realizing that Arn's assessment of the shaft was correct. Suddenly Arn cannot see anymore, despite wearing a magical helmet that allows him to see in the dark. Making sure his companions are still near, he climbs down a bit more and then can see again. Moonscar asks Arn several strange questions and then seems satisfied that Arn was not somehow switched with an "evil" Arn in the blackness.

Fortis flies down to the magically dark area and hovers just outside of its range, wondering if he should magically dispel it. After deciding against it, Fortis forges head and flies into the area. He quickly realizes the danger of the area as his magical light goes out and he suddenly loses the ability to fly! He plummets down several yards, barely managing to slow his fall with his tiny wings before crashing into the landing below. Unhurt but feeling the strength leaving his tiny frame, Fortis drags himself to his feet and stumbles forward. After a few steps, his light comes back on and he once again feels the comforting caress of magic around him.

Near the bottom, Seeker falls and Valinya is surprised by the no-mana zone, since Fortis, in his hurry to be away from the anomaly, forgot to call up and tell her! Seeker manages to brace himself and not get hurt from the fall, but Valinya is not as lucky and sustains some injury. Silver, struggling with her larger Dragon form in the narrow tunnel does quite a number on the unstable shaft and eventually falls, pulling down quite a bit of earth and supporting timber in the process. She finds herself hurt and partially buried at the bottom of a now filled in shaft.

After dusting themselves off, the companions head down an angled passageway and some shoddily constructed stairs and finally end up at a door leading into a bricked passageway. The group finds themselves in the middle of a bricked passageway leading left and right, with waterlogged wooden doors at each end. Valinya indicates that her vision showed her that left was the way to go.

Arn leads the way and opens the door, and they enter a large, wet and fungus covered room. Six rotting wooden posts hold up a dripping and sagging ceiling. Several doors line the room and the left hand side of the room is flooded. What looks like a collapsed pier can be seen beneath the sloshing and foaming water. A dead body floats face down out in the middle of the water. Fortis uses his magic to pull the body toward the shore. Bloodstains mark the back of the bloated body and several gashes in the clothing indicate knife wounds. It looks to have been dead for several weeks at least. Turning the body over reveals that the face, hands and large sections of the front of the torso have been chewed off.

As Fortis investigates the body further, looking for any signs of identification, several large sea crabs burst from the water, waving their sharp and menacing claws in the direction of the interlopers. 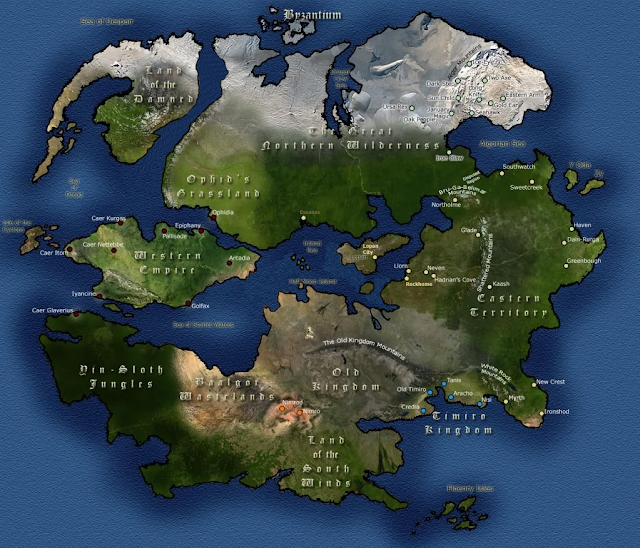 Posted by GMJasonGURPS at 7:06 AM