The undead horde surges toward the location of the Grey Company while the words of the Mage Ghoul echo through the ancient halls. Griffin says,  “Okay, guys and gals. let's go!”

Remar announces, "More undead incoming. Can any of you tell if any of the Traldar are still able to be helped? We have to get them outta here" Griffin moves forward to help the Traldar!

Kasiex says "I see no moving Traldar, only some dead ones." Griffin scans the area and only sees a few unmoving Traldar laying in the main door.The rest of the Traldar must have fled to the south. A Wight comes shuffling around the corner And a Ghoul as well. Iris moves forward to back up Griffin bravely but she is still shaken in the presence of the undead.

Remar hurls a magical bolt at Ghoul's head and the magic bolt rocks the Ghouls head back but it keeps its feet. The voice of Malthius rattles around inside Remar's head, "Whatcha wanna do, Rema? Play catch wit it?"

Draven hurtles across the open distance and takes a wild swing with his mace. The Ghoul attempts to dodge Draven's attack and succeeds!

Kasiex moves up trying to find a good shot as the slower undead surge forward as well. Griffin, in looking for an opponent and finds one! A Wight makes a wild swing at Griffin's torso and face. Griffin blocks the first attack and parries the second strike, wounding the Ghoul in the process.

A Ghoul slashes at Draven's face with its claws and fails! Draven laughs in the face of the living dead. Iris attempts to slash at the zombie near Griffin and hits it. Griffin and Iris take turns hacking at the ghouls!

Remar whispers "partum ignis" as he casts his spell and a huge fire springs up from the ground beneath the undead! Iris raises her brows in surprise. The undead let out mournful cries and Kasiex scrunches his nose up at the smell of burning undead flesh while he steps up, his bow ready and growls, "more from the north!" Kasiex shoots at Wight's torso with an arrow and succeeds! The Wight attempts to dodge Kasiex's attack and somehow manages to catch Kasiex's arrow and break it in half! Seeing this, Iris sucks in a breath through her teeth

Griffin attempts a Rapid Strike! The Wight attempts to dodge by jumping back from Griffin's attack but fails. Griffin's onslaught of blows takes the Ghoul down!  Another Ghoul steps up into Griffin's personal space and grabs him but luckily, he blocks it with his shield. Then a Wight steps up into Griffin's personal space as well and grabs him as well. The Wight grapples Griffin's torso with energy draining hands and succeeds! Griffin Parries and manages to slash the grabbing Ghoul in the process!

A Ghoul grapples Draven as well, trying to drag him down but Draven avoids the attack. Nearby, Iris swings her saber at a zombie and cuts into it while Remar whispers "partum ignis" as he again tries to Create Fire but the spell fails this time.

Draven rushes the ghoul in front of him, trying to push him back into the fire but isn’t quite strong enough to shove him back and Kasiex tosses his bow behind him and once again draws his sword. An attacking Zombie swings at Kasiex and hits but the Hutaakan's scale armor absorbs the blow.

Another Zombie swings at Iris's torso with a weapon and hits but she jumps back and dodges the attack. Iris then swings her saber at zombie as it shambles forward!

Griffin attempts to drive the wight back with a speedy onslaught! Griffin’s flaming weapon catch it on fire. The wight is not happy at being in flames! Griffin makes another Rapid Strike! The Wight attempts to dodge Griffin's attack and fails! Griffin slices the wight deeply! The Wight then grabs at Griffin's torso with its hands and succeeds!

A Ghoul also steps into close range and grabs at Draven's torso with its hands and succeeds but Draven swats away the ghouls hands with his shield. Iris slashes at another Ghoul, cutting him. The Company's weapons are biting into the creatures, they just aren't being effective enough!

Nearby, Remar whispers "partum ignis" again, causing another circle of flame to spring up from the stone floor, while next to him, Draven steps forward and calls forth the power of his gods to destroy the filth that surrounds him and his friends. Remar wonders why it doesn't seem to bother Malthius when Draven does his thing and then the voice of Malthius rattles around inside Remar's head, "Ye just mind yer own frakkin business, boy!"

Draven's holy blast ravages the undead horde, causing some of them to lose their desire to fight! Draven laughs as the holy energy rushes through him. "Down to the iciest pits of hell with you all!" Meanwhile, Kasiex swings at zombie's torso with a sword and succeeds! The zombie fails to dodge and the Hutaakan’s sword bites in.

Griffin steps into the flames to escape the close combat with the wight, then slashes at the foul undead to his left, making two rapid strikes. The Wight attempts to dodge Griffin's attacks and fails! The wight goes down.Griffin feels the flames licking at his heels, but is not yet burned.

A Wight swings at Kasiex's torso with a weapon and  hits but Kasiex manages to dodge the strike. The ghouls continue their attack, though many of them have been terribly wounded. A Ghoul swings at Draven's face with its undead fingers but misses while another Ghoul swings at Iris's face with a handful of clawed fingers and also misses. Iris finds herself surrounded by ghouls, she looks back at Draven and takes a retreating step backward while swinging her saber at the nearest Undead. She manages a skillful strike against the Ghoul.

Remar hurls a magical bolt at a nearby Ghoul's head, striking it solidly and causing Ghoul brains and skull to spray over onto Draven and Iris. Remar grins as he drops another opponent.

Draven steps forward and shouts "Yes! Come to me, to your deaths! That which is dead should remain in the grave!" as he unleashes his disruptive divine blast! Many of the undead are blasted and quite a few of them turn and flee Draven’s divine presence.

Kasiex swings at Ghoul's torso with his curved blade and lands a critical strike, hacking the Ghoul to the ground!

Griffin  feels the bite of the flames beginning to penetrate his protective clothing as he makes another rapid double strike on a nearby Ghoul, chopping it down.

A Wight swings at Draven's torso with a undead hands and succeeds but Draven brings up his shield and deflects the blow. Another Ghoul attacks Griffin and he too uses his shield to defend.

Iris presses her attack, slashing at more undead abominations but some of them manage to keep her attacks at bay.

Remar hurls a magical bolt at a Ghoul's face, smashing it in. The voice of Malthius rattles around inside Remar's head, "Looks like yer finally getting da hang uh dat one!" Remar can't help but smirk at the comment.

As the dreaded Death Knight approaches, Draven takes a second to armor himself against the onslaught while Kasiex continues to hack at nearby undead.

Death Knight says "Are you prepared to die?" 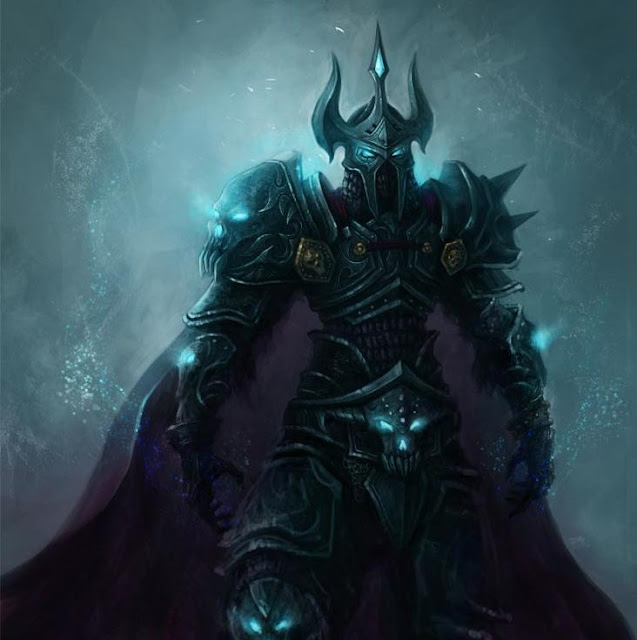 Garrett "Griffin" Constantine, a Thyatian rogue of a gambler from Penhaligon rolled by Arne J

Kasiex, a Hutaakan Wildsteward used to ranging the mountains and valleys now led down a new path by Patrick B

and Jason W as The DM

Posted by GMJasonGURPS at 7:38 PM